I feel great! I slept 7 hours last night. It wasn’t all in one chunk, as my baby woke twice, and it probably wouldn’t be something most people would brag about, but compared to the last couple of weeks it was brilliant. 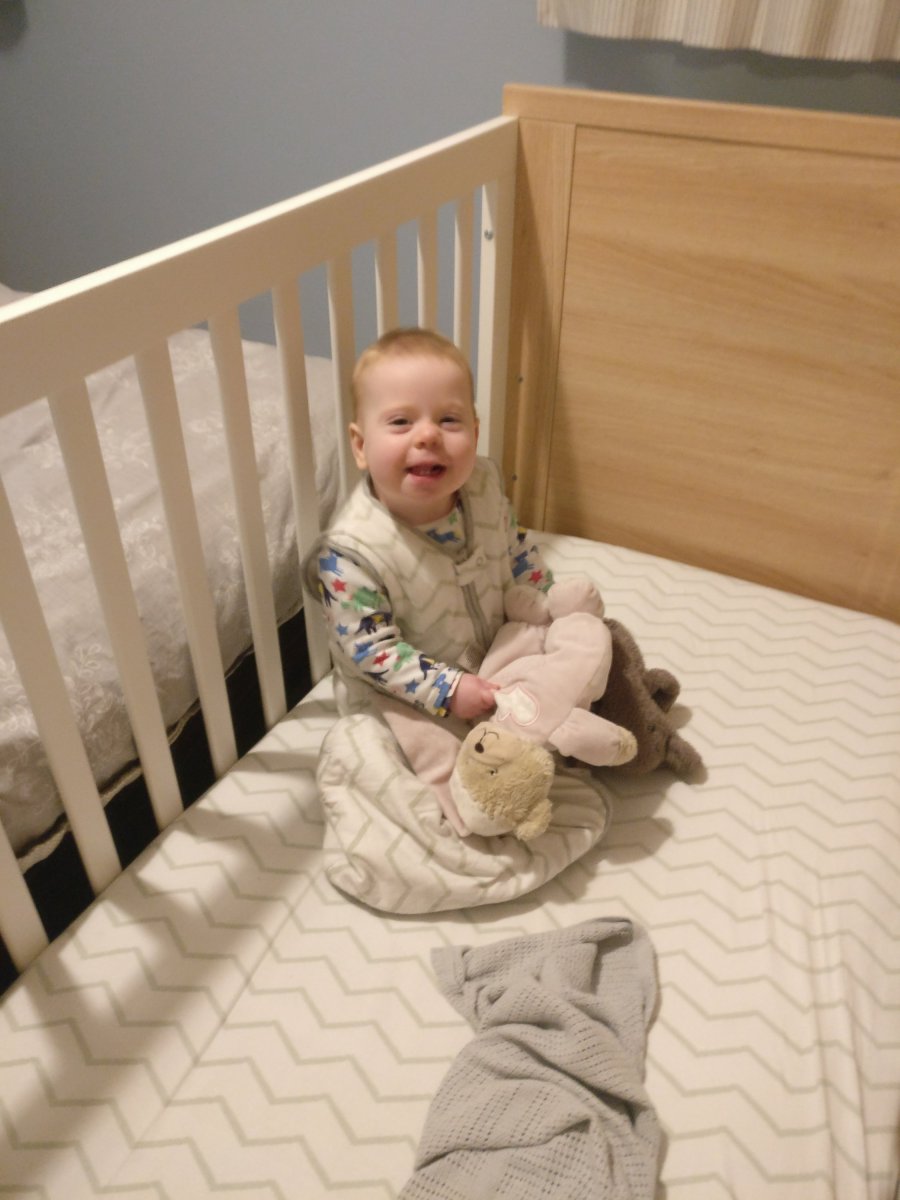 All smiles after a good night’s sleep

In contrast there was one night over Christmas when my baby girl had fallen asleep sideways across our bed at 4am. My husband was perched along the edge and I was curled in a ball at the bottom. Neither of us dared move a muscle in case we woke her, because she’d been awake since 2am and was desperately tired, but despite that she woke 20 minutes later anyway. All I could think was please let tomorrow be better, hopefully it is a temporary sleep regression and will pass.

Newborn babies are known for waking a lot overnight, but generally as they get older they move towards longer stretches of unbroken sleep. A sleep regression is a term used to describe a change in sleep habits where a baby seems to revert to waking more against the usual progression.

Everyone knows newborns wake a lot so new parents get lots of sympathy. As a baby gets older sleeping well is seen as an achievement of the parent, even though it is often more a case of luck, so it can be hard to admit when your baby isn’t sleeping. It is especially hard when you are back in work and don’t have a chance to catch up on lost sleep, but don’t want your colleagues to think you are not operating at full strength.

The most well known sleep regression occurs around four months, when a more adult like sleep cycle develops. Every few hours a baby goes through a phase of lighter sleep that lets it subconsciously check if the conditions are safe and the same as when they went to sleep. If they are used to being fed or rocked to sleep and that isn’t still occuring it can cause them to wake. We were lucky and we seemed to sail through that one, as our girl adjusted well to settling herself to sleep, so I thought we were over the worst, and was probably a bit smug about it.

However there’s another sleep regression at about eight to ten months that I hadn’t heard of and that seems to have hit us, like karma getting me back.

It is not clear why it happens, but there’s a few theories that I’ve read online. It is a stage when babies are developing their mobility a lot, so it is thought they just find it hard to switch off at night as their brains practice all their new skills. Another theory is it is also the time babies realise that you are not connected to them, and they can get separation anxiety. It is generally also about now they drop their third nap, and can be overtired by bedtime.

We first noticed a change around eight months when she learnt to pull herself up to stand. Instead of settling in her cot to go to sleep she kept standing up. We kept having to lie her down, and I found a gentle hand on her chest or back relaxed her enough to drop off, as she seemed to like the reassurance that I was close. It meant it took longer for her drop off to sleep, but the nights were still pretty manageable.

Our first really tough nights occurred over the Christmas holidays. Suddenly she was waking in the night and couldn’t get back to sleep, but because she was tired she would get upset and cry. Most times we could comfort her, but there were a lot of false starts where we would think she was asleep, but five minutes later she would be back up again. Sometimes she got so tired that nothing we did seemed to help. She could be crying for ages until she fell asleep exhausted. It was hard not to feel helpless that we couldn’t do more.

It was strange because during the day she was still so happy and smiley, so I didn’t think there was anything really wrong, but I was dreading the nightime, and I was often laid awake anticipating the wake ups.

After a sleepless night, my baby would often have a long nap midmorning so I knew she was getting enough sleep, but I worried that more naps during the day were setting us up for a cycle of another sleepless night. I tried changing the daytime nap times a bit but it didn’t seem to make a difference.

After a few days I felt like I needed to do something, but then I started googling and read about the eight to ten month sleep regression for the first time. The advice I read said not to make any drastic changes, as it should be just a temporary phase.

Me and my husband managed the nights by taking turns comforting her. There were also nights when I was up more, but then he would take her downstairs in the early morning so I could catch up on sleep for a few much appreciated hours.

After a couple of weeks I was wondering if I had been wrong about it being temporary, and was back to thinking I would need to do something, but then almost as suddenly as it started we had a better night’s sleep. Then that turned into a few nights in a row, and fingers crossed we are now over the worst of it.

I know there will be sleepless nights again in the future, but what I’ve learnt from the last few weeks is that once I’ve ruled out illness or discomfort, sometimes there’s nothing I can do to help except provide comfort. It is not a good time to be making big changes to routines or schedules to try and fix. Instead I just need to take each night as it comes, work with my partner to support each other and try to catch up on sleep when I can.

One of the joys of being a parent is watching them grow up and develop and change so fast. It can mean there’s some tough times while they adjust, but they also happen so fast. At 4am it may feel like the longest night, but it will soon pass, and the smiles the next day are worth it.